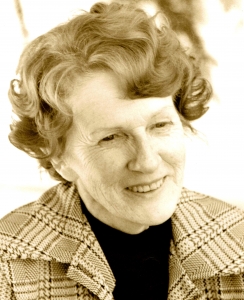 One October day 34 years ago my mother was a vibrant 71-year-old who loved to bowl and visit friends. The next she was gone. Only it didn’t seem like it. In many ways she was still with me, and from time to time I would find myself talking to her.

No, I haven’t gone ‘round the bend. I know she’s dead, but it’s comforting to tell her of my life and what I know of family and friends. It keeps her in my memory—my life. It’s a kind of legacy. Like what she taught me about life, love, and sacrifice.

My brother and I inherited something short of $20,000, a Honda Civic, some old furniture, and a trunk stuffed full of heirlooms and memories. Mom didn’t have a large estate, but the legacy she left was as big as her heart. She gave us her values, and one of those values was helping others.

Mom would have laughed if anyone had ever called her a philanthropist. Philanthropists had big money and famous names like Ford, Rockefeller, and Carnegie. But she gave what she could of her time and money. Her gifts eased the lives of others and helped make her upstate-New-York community a more fulfilling place in which to live.

Had she the wherewithal, she would have loved to have added to her legacy the way those titans of American philanthropy did. Maybe some future little girl would have been a frequent visitor to a Van Dyke Library the way she had been in the 1920s to her hometown Carnegie Library. She was proud of her maiden name and old-New-York Dutch heritage.

I’ve never had any children, but my brother did, and I see in them some of my mother’s values. It’s a shame she was unable to earmark a portion of her small estate for her three grandchildren to use in carrying on her belief in charity. It would have been a wonderful enhancement to her legacy.

With judicial management that small fund could grow. Future descendants could learn of Hazel Van Dyke Patterson (1912-1983) and her generosity of spirit. Through that legacy of philanthropy, her memory could live on past the generations who knew her in life.

Mom didn’t have anywhere near the money or expertise to setup a private foundation, and there wasn’t much else you could do back then if you wanted to leave your heirs a philanthropic legacy.

Today it’s different. You don’t have to have the mega wealth of a Ford, Rockefeller, or Carnegie. Now you can establish a donor advised fund with a few thousand dollars. From that fund, you and others you name can make charitable gifts where and when you want. Had Mom been able to do that, my nephews and niece and their children could even now be making gifts from that fund in her name.

I wish Mom had had that opportunity. Maybe I’ll tell her about next time we talk.